The dress (and the party)

So yesterday, a few hours before the party, I tried on the dress and realized that there was a problem with the back. It was rolling funny, and I panicked, and instead of thinking about what I'd done since I last tried on the dress, I took out the top back seam. If I'd taken a second to think, I'd have remembered that I had sewn the lining to the zipper and hadn't tried on the dress since. The lining was a tiny bit smaller than the outer fabric (I made the lining and then made adjustments to the pattern; I knew the lining was smaller).

I know you're really curious to see the dress.... so here it is, the front and back: 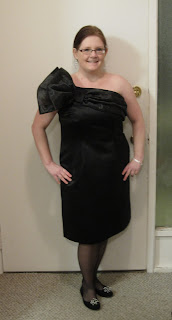 I'm thrilled with it and think it looks really good, although you can't see that much detail in the pics. Ian was quite surprised at how good the big bow looked. He'd thought it would look silly and overwhelming but what it did was to "bring the eye up to [my] pretty face." (he really did say that; isn't that sweet?) He also thought that the bow helped to give me a more hourglass figure by widening my shoulders - without me having to wear some crazy 80s shoulder monstrosity. This is definitely a silhouette that works for me.

I got a lot of compliments on the dress both from people who knew (and were amazed) that I'd made and it from people who asked where I got it. Considering the pattern is over 40 years old, I guess that's a good sign :)

The party was fun. We did a "white elephant" gift exchange. Everyone brings a gift and gets a random number between one and the number of gifts. In numerical order, people get to either open a gift or steal a gift. Gifts can be stolen only twice, and a person can't steal back a gift that was stolen from them. We ended up with a Snuggie. Surprisingly (?), lots of people wanted the Snuggie. The commercial is lame (and spawned at least one funny parody) but the product itself - a blanket with sleeves so that you're warm arm your arms are free - seems to be one that people want.

The DJ actually played contemporary music which was a nice change. At these things, you usually end up with pop music from 20 or more years ago. This time, he played top forty stuff from now. Not that I was dancing, of course - it's hard to do that with the cane - but it was nice to listen to something that's current.

Speaking of the cane, now that I keep it with me all the time it's easier to tell people that I'm on long-term disability when they ask what I do. Before, I felt like I had to do some explaining because I looked healthy. Now, people the see the cane and can assume some physical, cane-related reason for me to be off work. And if they draw the wrong conclusion about why I'm not working, that's ok. I don't know them and won't be seeing them that often anyways.
Posted by Chantelle at 12:05 p.m.

Wow! The dress is fantastic! You did a fabulous job and look beautiful. And you're right - the bow brings the eye to your face :) The shoes are a great match as well.

The dress is amazing...And he is right you have a beautiful face...

so beautiful - both you and the dress. it is incredibly flattering!

You are amazing, and Ian is correct! The bow definitely draws attention to your pretty face!! :-)

I am in awe of your talent!

Gorgeous!! You did a great job and look amazing!

Holy cow, looks like some high falutin' garment from some high end store. You did a really great job. It is beautiful, as are you.