Call from my oncologist

My oncologist called me today to tell me that the ultrasound and mammogram I had recently showed something in one of my surgery scars. It appears to be a cyst that's filled with fluid and they want me to come in for a follow-up ultrasound in about six months. Then she said that she hadn't looked at the results from the bone or CT scans and would see me Friday.

One way or another, we'll find out on Friday. I just thought it was weird that she would call to give me some results and not others.

It is possible that the thing found in the scar isn't a cyst but the cancer returning there - if that's what's going on, then we'd just do a mastectomy and get rid of my ever-flattening mini-boob. As an aside, the difference between it and my fully-growed boob appears to be at least two cup sizes now. I need to get out and get a prosthetic so that I can make my boobs match. If it turns out that I do get a mastectomy, the difference between what I've got now and what I'd have then won't be so much that I'd think I'd need a much bigger prosthetic. At least, that's my theory.

In other news, Gozer has found a new bed: our laundry basket full of clean laundry. Silly girl! 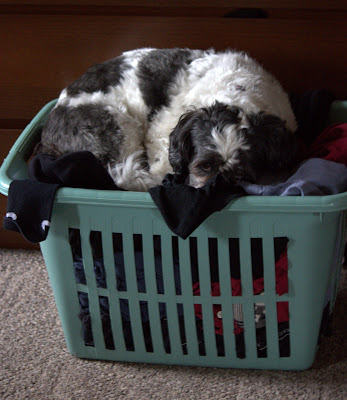 Check after SIX months? Isn't that a very long time to wait to see if the 'cyst' has grown? Ugh, I hate not being sure that what is thought, is right!But anyway, they have seen a lot and I know they wouldn't ignore something they weren't 100% sure of.In the meantime, hope you don't become anxious..or should I say "TOO" anxious?Hope the other results are perfect.